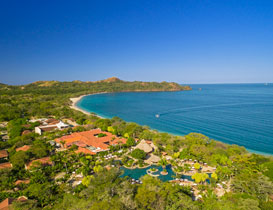 PLEASE NOTE: THIS REVIEW IS INTENDED TO PROMOTE SALES AS A TRAVEL ADVISOR, I WOULD APPRECIATE YOUR BUSINESS IF YOU DECIDE THIS VACATION IS FOR YOU.

This was my first time staying in Costa Rica other than a cruise port stop earlier this year.

Getting to Costa Rica involves a connecting flight each way, we were flying United through Houston.  Nothing to complain about with regard to our flights.  They were ontime, smooth and we did use mileage to upgrade as many flights that we could, but for the flights that we were not in First class, we had Economy Plus and it was fine for the shorter flight (just under 3 hours from Houston to Liberia airport.).

Customs & Immigration in Costa Rica was very easy and did not take much time at all, again very smooth.  Once we were done with all of that, our transfer company (CATours) was waiting for us.  We were with a group, so we waited for another flight that arrived close in time to join our bus load of happy Travel Professionals to our hotel.  They gave us cool washcloths and an assortment of beverages to enjoy while we waited and also for the ride to the hotel.  We had a guide and driver, so en route to our hotel, he would give us some history of the country.  Normally, the ride would be about an hour from the airport to Guanacaste; however, there was some road work construction going on and we were delayed about 30 minutes in getting to our destination.

Upon arrival to the Westin, we were welcomed with a cold drink & quickly directed to our group check-in desk to obtain our keys and wrist bands.   The Westin is an all-inclusive resort, but they do require you to wear the wristbands, we had special ones that alerted staff that we were with the Elite group.  Once checked- in , we were driven to our room.  Yes, driven.  This resort is very large and they have shuttles that will take you all around, though walking about is not difficult.  We walked around the majority of the time. 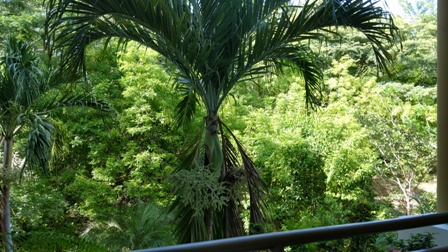 This resort has 10 restaurants, so you are never without a place to eat, of course we were only there for 4 nights, so we didn’t get a chance to try everything.  We did eat at the Latin American restaurant and it was good, but not over the top impressive.  We had a fabulous dinner at the Italian Restaurant, everything here was great. Our other two nights were spent with group events, our opening night gathering had buffet stations and I personally made a few tacos and they were very good.  The last group night was a sit down dinner at the restaurant located in the Reserve area (private residences) & they served a surf/turf dinner that was very good as well.  We had lunch twice at the pizza place and another day we ordered burgers by the pool.  Breakfast was hit and miss, we ordered room service two days and it was just mediocre and then one morning we had a group breakfast in the buffet restaurant and it was just OK.  We should have gone into the omelet line to have something cooked up fresh.   We are not big foodies & we  didn’t starve, that is for sure!

Bars a plenty and they were very good with their drink mixes and their drink pours.  Never felt like the drinks were watered down and the wine pouring was very generous...so much so that our last night when the lobby bar was closing at 10pm, the bartender left out both bottles of wine for us to drink...it was too much, but we cracked up.  That was “Ricardo”, super nice guy who commutes 90 minutes each way on the bus to work at the Westin, he was leaving at 10pm and was scheduled to work the next day at 8am!  We saw him before we left for the airport and he gave Bill “Tomato Juice”--aka a Bloody Mary, but he’s not allowed to serve alcohol before 10am, so I have no idea why they needed him to be at work at 8am!!   Pool Service was good, though they could have used 1-2 more servers at the Royal Beach Club Pool...maybe they aren’t used to having that many Travel Professionals at one spot.  Then we spent one night watching a show in the Astrea theatre and had a few drinks at that bar, but most nights we ended up at the Imperial Bar which is where the DJ played music every night from 11pm-1am.  I don’t know why they start the party so late, but we were there every night dancing our hearts out.  The DJ was good at playing requests, but he was the best on the last night.   That may be because we were almost the only ones left in the bar and I did give him a tip (should have done that sooner on the trip).

Other entertainment varied nightly between karaoke, magic shows, comedy, etc.  We really didn’t view any of the entertainment other than our own dancing, you could say we were the entertainment at times.  People do enjoy watching us dance and even today as we boarded the plane, people who were in our group commented,  “oh those are the dancers”.  It never gets old, I love that our love of dancing comes out when we travel.

The Westin does have a full service spa and we did check it out.  On our last day we both had one hour massages and I also had a hair wash and blow-dry.  We were very happy with our services and the professionalism of everyone we met in the spa.  The Spa is a little hard to find as it’s tucked away in the Reserve side of the resort, which is somewhat off limits to hotel guests, but everyone is very helpful in advising you directions to get to where you need to be.

The Beach is lacking here and when you consider the name of the resort  “Playa Conchal”...this means shelled beach...so the sand is composed of broken shells, not my idea of a beach so I didn’t even step foot on the beach.  We know of people who did and they were not impressed.  It’s not a safe beach for swimming because of the undertow and we’ve heard that sometimes crocodiles find their way onto the beach because a nearby river feeds into the ocean.  No, thank you!   The Beach is public, so you also have to worry about being approached to purchase local goods and need to pay close attention to your belongings - again, no thank you, I’ll remain content by the pool.  Not all resorts in Costa Rica have this problem, so there are areas where you can stay and have a nice beach and not have to worry about the sales people.

Now even though this resort is beachfront, you really don’t see much of the ocean.  But then again, this is Costa Rica and your first and foremost interest when coming to this beautiful country is to take in the beautiful nature that is all around.  For example, one morning we were looking out our balcony door to see what the weather was like and noticed the tree moving, but not all of the trees so we concluded that it was not windy.  Well, the trees had several Monkeys in them eating lunch, so they were moving the trees.  Pretty cool to look out your window and see Monkeys climbing in the trees.  This being said, there are plenty of resorts in Costa Rica that give you the best of both worlds..you still have nature happening around you, but can enjoy a room with a beautiful ocean view.

We did do an excursion and  honestly,  you’d be remiss to come to this country and simply stay at your resort.  So much to see & so much to do.  We took part in the Vida Aventura excursion which included zip lining, horseback riding, hot springs/mud bath, a pool and water slide along with an authentic Costa Rican lunch.  Zip lining was awesome, this was my second time zip lining in my life and it was a fabulous day. Our guides were very attentive, confident and encouraging.  They made us feel like family.  A total of 7 lines with lots of hiking in between, definitely logged in plenty of fitbit steps during this part of the excursion.  Next up was horseback riding.  I was not too sure about this and ended up bailing when the host said that I could enjoy a 30 minute massage instead...OK, hook me up!!  My husband said that I made the right decision, there were some dicey areas on the trail and he knew I would have been freaking out!  I thoroughly enjoyed my massage.  I didn’t do the hot springs or mud because we only had an hour and I didn’t want to deal with the clothing changes.  The only downside of the excursion is that it took about 2 hours each way to get there.  We had an excellent & engaging tour guide and great group on the minibus, but still a tiring day.  The thing is, to do anything in Costa Rica, it’s going to take some driving.  Most attractions are 2-3 hours away.  The alternative is to split your stay into different regions of the country in order to see everything and experience the many facets of this country.

All in all, we enjoyed our time in Costa Rica.  We experienced a great resort that is not necessarily for everyone.  It’s not a resort that  I would return to, but really by no fault of anyone.  I’d return for the food and the service and the ability to get exercise walking around from place to place..but I like seeing my ocean.  My only real complaint about this trip is that I was most certainly breakfast, lunch and dinner for those mosquitoes!  I was using natural repellent and it was working for the most part.  I had a few small bites but then came the day by the pool and I put sunscreen on over the bug repellent and I was a eaten alive.  Not nearly as bad or as miserable as I was several years ago in Cabo when this happened...but since we are living in the age of the Zika Virus, pregnant ladies or those wanting to get pregnant should refrain from traveling to Costa Rica.

All in all, great country with super friendly people!!