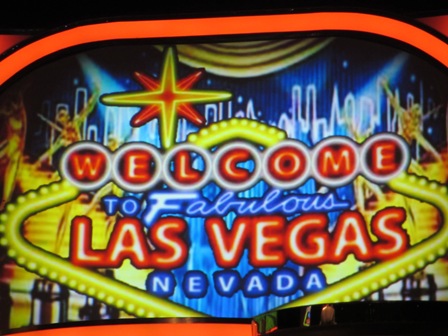 PLEASE NOTE: THIS REVIEW IS INTENDED TO PROMOTE SALES AS A TRAVEL ADVISOR, I WOULD APPRECIATE YOUR BUSINESS IF YOU DECIDE  THIS VACATION IS FOR YOU.

It is no secret that I am not a huge fan of Las Vegas.  Although, today I realized that I have been to Vegas 4 times in the last 7 years.   I have come at all different times of the year, but this was my second time visiting Las Vegas in the summertime.  I am a sunshine person, I love the heat and I love having pool time.  I think I will need to keep all my future visits to the summer time because this was one of the most perfect visits to Vegas that I've had.

The purpose of the trip initially was to meet up with my cousin who was traveling into town from Dublin to celebrate her son's 21st birthday.  It turned out that her dates overlapped with Bill's birthday, so the very easy decision to meet them for the weekend was made.   Because I have been to Las Vegas so many times, I really didn't have any interest in doing the "tourist" things, so my cousin and her family did several "tourist" things:  the day trip to the Grand Canyon, the Rifle/Gun store/shooting range, viewing the Pirate Show outside of Treasure Island, and the Fountain Show at Bellagio.   They took the time to walk up and down the strip many times, did some shopping and I think overall had a very nice, well-rounded visit to Vegas.

Our agenda was to spend lots of time by the pool, enjoying the sunshine, working on the tan, take naps and for me concentrate on learning my Body Pump choreography for the new release.

We stayed at Treasure Island.  I do like to try out different hotels, so when my cousin chose this place for their stay, I was fine with that so that I was able to experience a new place.  I was pleasantly surprised with the rooms at Treasure Island- very tastefully decorated and on the large side.  The bathroom was very functional, except the toilet paper roll just seemed too far away from the toilet.  My husband felt the same way- it was just awkwardly placed.   We had a view of the strip and the pool if you looked down 8 floors.  We had a non-smoking room and I can truly say that I did not pick up on any smoking odor.  I have been in older Vegas hotels before and you could smell the stale smoke everywhere.  In fact, this is probably the first time visiting Vegas that I can honestly say that my clean clothes that I didn't wear will not have to be washed.  So many times in the past, your entire suitcase stinks when you get home.   I had a conversation with one of the dealers and commented on how well ventilated things seemed and she did mention that they have done through extra measures at TI and also noted that she doesn't see as many people smoking as she once did.  She was an older lady who has probably been working as a dealer for 20+ years.

Our check-in experience was a little daunting.  We arrived around 11am and it took a good hour to work our way through the "Disneyland-style" line.  We could have stored our bags in my cousin's room since they arrived several days before us- but there was also a sign at check-in saying that rooms were ready at 11am, so we decided to bite the bullet, get checked in, unpacked and meet up for lunch.  It worked out well, but it is crazy when your wait time for check-in is longer than the actual in air time for your flight!  The desk clerk who checked us in was very pleasant and efficient.  She was also able to put us on the same floor, two doors down from my cousin.

We were by the pool all three days.  Just for 2-3 hours on the first two days, but then we spent the entire last day by the pool and since it was Bill's birthday, we rented a Cabana.  Now there was a bit of a mixup initially, our waitress the day prior said she had confirmed us for the Cabana, but when we got there we learned that we were on the waitlist.  We were bummed, but once we spoke to the Manager, he was able 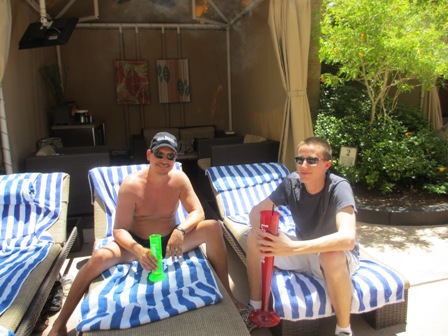 to confirm us into a Cabana.  They had a lot of empty ones and given that it was nearing noon time, they didn't want to lose out on the revenue- they are not cheap - $250 for the full day.  So what do you get for that?  Well, shade which for some of our group was very welcomed.  You have some nice chairs and table in the shade which made for a nice dining experience.  You have a refridgerator stocked with waters and sodas.   They re-stock the fridge twice total for "free" and subsequent fills are at a charge.  The Cabana Supervisor did not charge us for the third stocking which was all water.   There is a TV in the Cabana which we didn't use- I suppose if you're there when  major event is on TV, you would put that on.   You also have 3 nicer lounge chairs that are for the Cabana's only and they really were quite comfortable.    We heard that TI was one of the better Cabana values on the strip, but I don't have anything to compare it with, it's certainly something you do for a special occassion or make sure you have enough people with to split the cost.  You also get a dedicated cocktail waitress and can order food from the full restaurant menu.  Our server for most of the day was very attentive and came to check on us frequently; however, once she went home it seemed that the pool area was short staffed and service does suffer.   I can't blame our new server because it's not her problem that she now had all 16 Cabana's PLUS random people around the pool to take care of, management should never let the staffing suffer like that.  Probably my only other complaint would be that the ice bucket should come with tongs or a scooper.  You pay that much for a Cabana, you should have the appropriate serving utensil.

We dined at TI in several of their venues.  In fact, all of our meals were at TI.  We ate at The Buffet for lunch on our arrival day and they had a lot of options: salad bar, sushi bar, carving stations, variety of side goods and a dessert station that was very sinful!   Our waitress was a little lacking for anything outside of the buffet.  We had wanted to order cocktails and that seemed to be beyond her comprehension.  Why would we want to order a cocktail when soda is free?   That was sort of the attitude.  We also had to write down exactly what we wanted, kind of strange.

For dinner we ate at Isla Mexican Restaurant & Tequila Bar.  Bill & I have eaten here before and it did not disappoint.  From the appetizer chips/salsa and guacamole/queso on the side to our entrees, which a few had their stacked steak, I had fajitas, another had steak nachos - really no complaints about the meal and we had great service as well.

Our second day was lunch poolside since we slept until 1pm, it took awhile to get a waitress to serve us- they certainly were spread thinly amongst the crowded pool area.   Basic pool menu from which to order.  I had a hot dog, Bill had a salad and both were just fine.   I sort of got the feeling that the servers would prefer to bring you drinks instead of food, but that was just my take on things.    For dinner that evening, we picked up a quick burger at Mirage (next door to TI) at the BLT Burger joint.  We had to get something quick because we were going to see the Terry Fator show at Mirage and needed to pick up our tickets an hour before show time.  It was the peak busy dinner hour and keeping that in mind, we were in and out of there in 40 minutes.  We literally got to our show seats as the curtain was being drawn.    We also ate at the Coffee Shop for a late (2am) breakfast before going to bed that night.   After 11pm, the Coffee Shop has a very limited menu, but it was basic and good.

Our last day was in the Cabana, so we did order lunch which comes from Kiahunaville Restaurant.  I had a French Dip Sandwich and it was delicious  Bill ordered a seafood salad, one cousin ordered sliders and another ordered chicken sandwich.  No complaints, the food was all very good!   For dinner, we tried out Gilley's BBQ.  Again, a meal that did not disappoint.  The side Macaroni & Cheese had a kick to it, but was very good.  Most of us had the Spare Ribs, but Bill had the Salmon and we were all very happy with our choices. 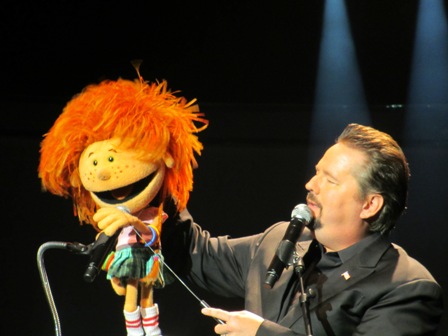 As for Entertainment- we did go to the Terry Fator show and thoroughly enjoyed it.  I have clients who have gone to see him repeatedly and I can see why.  Very entertaining, very comical- it's the type of show that goes so quickly because you are laughing continually!   The rest of our entertainment was "Gilley's"- the Country Western Dance Hall.  Bill & I danced until the wee hours both Friday and Saturday nights.  The band "Austin Law" was on stage both nights, we have seen them perform before and they are very good.  We got a good amount of dancing in and the Saloon had a few guests drop in.   Bill Engvall was there Friday night and Randy Couture was there Saturday night.  Added to the excitement for sure.   Sunday night there was supposed to be line dance lessons fro 7-9pm and we had planned on going; however, because of some flood issue in the Gilley's restaurant side, they moved the dinner service to the dance floor and canceled the lessons.  This tells me that the lessons are not a big draw for people.  Turns out they canceled all dancing for that night, we were bummed - but that did allow us to get to bed early and prepare for our return trip home today.

For flights to and from Vegas we were on Virgin America, no doubt our airline of choice.  Smooth fights, great crew- I just can't say enough about them.   I love their upgrade option 6 hours prior to fight.  For the Vegas routing, the upgrade charge was $158 total for both of us each way.  Well, when you consider that we would have paid $50 for checked bags, the upgrade charge is so minimal!  It's well worth it!

I will say that for this trip, Vegas didn't seem to be overpriced, so maybe they have toned things down a bit in line with the current economy.   That is part of why I have had such a hateful feeling for Vegas- when you buy a glass of wine and know that you can buy 2 bottles at home for the cost of your one glass, something is serously wrong!   We found that drinks were priced reasonably this time around.   I will definitely be back to Vegas, not sure when- but we do have fun here, but that's because we make it what we want it to be.  It was a great weekend with my cousin and her immediate family.  I don't get to see her often enough! 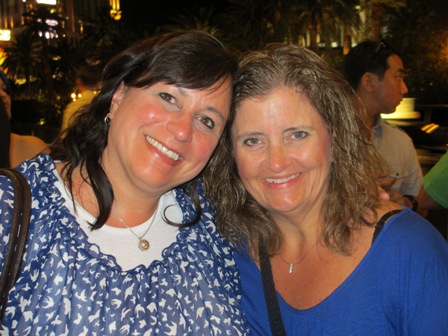 To view pictures of Treasure Island, you can check out my TREASURE ISLAND FLICKR ALBUM HERE.